The Democracy Paradox podcast brings scholars from political science, sociology, economics, and other disciplines to discuss social and political ideas. The aim is not to debate policy or politics, but to introduce new concepts to listeners so they can understand politics and society better. The host, Justin Kempf, works to create conversations that test our assumptions about democratic governance, while offering hope for the success of democratic ideals. 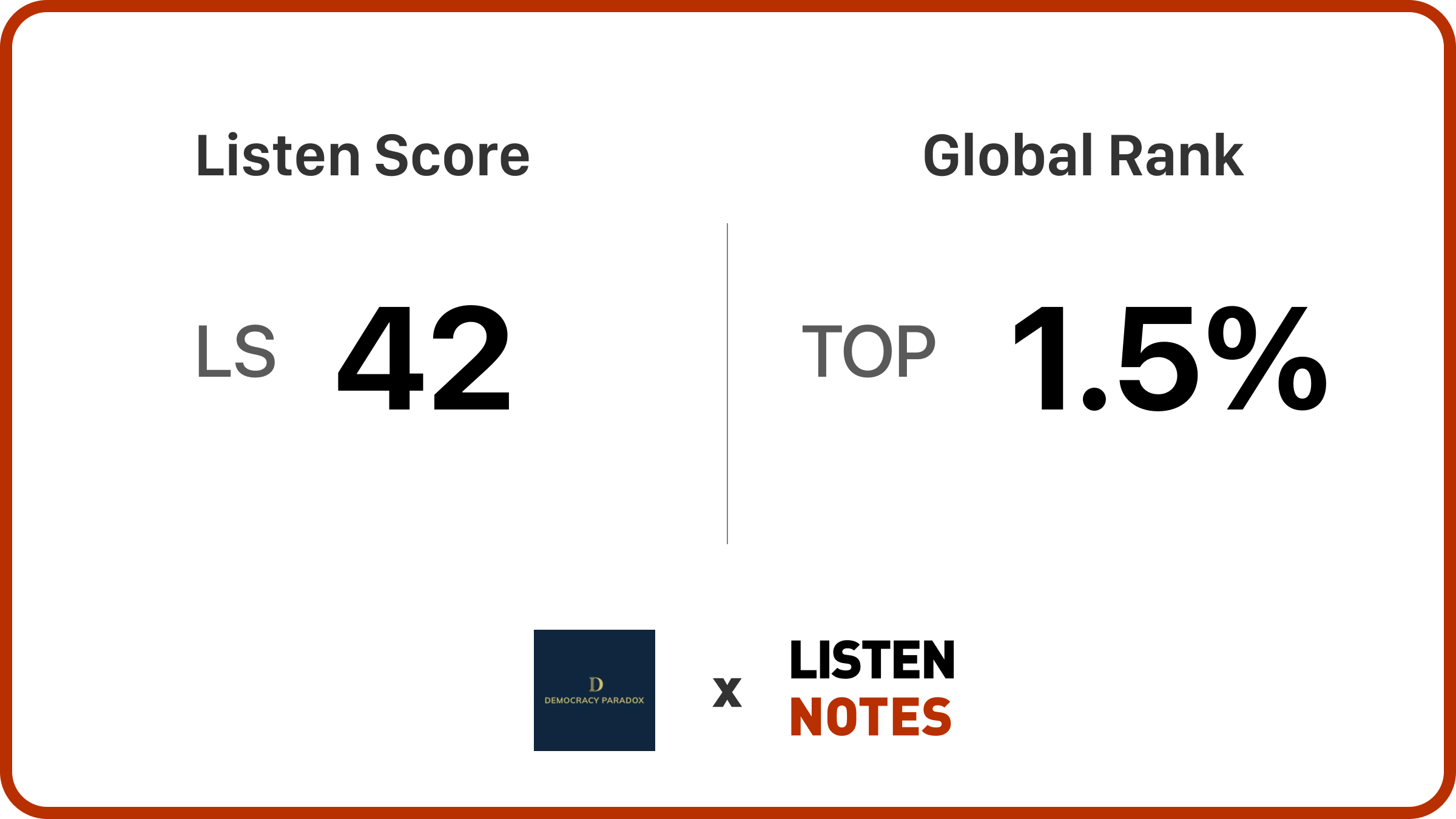 A Podcast About Democracy

The Democracy Paradox podcast is available on Apple Podcasts, Spotify, Google Podcasts, Stitcher, and just about anywhere podcasts are found. It is a proud member of the Democracy Group network of podcasts. Please subscribe and leave a review wherever possible. Your support keeps this website and the podcast alive. Below is a list of past episodes.

Michael Walzer on Liberal as an Adjective

Elizabeth Economy in a Wide Ranging Conversation About China

Naunihal Singh on the Myth of the Coup Contagion

Michael Ignatieff Warns Against the Politics of Enemies

Emilee Booth Chapman Has Ideas About Voting with Profound Implications

Frank Dikötter on the History of China After Mao

Larry Diamond on Supporting Democracy in the World and at Home

Neil DeVotta on the Protests in Sri Lanka

Aynne Kokas on the Intersection Between Surveillance Capitalism and Chinese Sharp Power (or How Much Does the CCP Already Know About You?)

Michael McFaul and Robert Person on Putin, Russia, and the War in Ukraine

Michael Coppedge on Why Democracies Emerge, Why They Decline, and Varieties of Democracy (V-Dem)

Kathryn Stoner on How Putin’s War has Ruined Russia

Marta Dyczok and Andriy Kulokov on the Media, Information Warriors, and the Future of Ukraine

Yascha Mounk on the Great Experiment of Diverse Democracies

Craig Whitlock on the Lessons Learned in Afghanistan

Miles Rapoport on How We Can Achieve Universal Voting

Between Russia and China: Anja Mihr on Central Asia

Moisés Naím on the New Dynamics of Political Power

Joseph Fishkin on the Constitution, American History, and Economic Inequality

Bilal Baloch on Indira Gandhi, India’s Emergency, and the Importance of Ideas in Politics

Angus Deaton on Deaths of Despair and the Future of Capitalism

Joshua Yaffa on Truth, Ambition, and Compromise in Putin’s Russia

Zoltan Barany on the Ineffectiveness of the Gulf Militaries

Daniel Brinks on the Politics of Institutional Weakness

Tom Ginsburg Shares his Thoughts on Democracy and International Law

Martin Conway Believes “Democracy Owes its Durability Not to its Principles but to its Flexibility.” Democracy in Western Europe from 1945 to 1968

Donald Horowitz on the Formation of Democratic Constitutions

Karen Greenberg on the War on Terror, Donald Trump, and American Democracy

Mallory SoRelle on the Politics of Consumer Credit

David Stasavage on Early Democracy and its Decline

Michael Miller on the Unexpected Paths to Democratization

Sebastian Strangio Explains the Relationship Between China and Southeast Asia

Can America Preserve Democracy without Retreating from it? Robert C. Lieberman on the Four Threats

Elizabeth Nugent on Polarization, Democratization and the Arab Spring

Ryan Salzman is an Evangelist for Placemaking

Thomas Carothers and Andrew O’Donohue are Worried About Severe Polarization

Can Democracy Survive the Internet? Nate Persily and Josh Tucker on Social Media and Democracy

Zizi Papacharissi Dreams of What Comes After Democracy

Michael Hughes on the History of Democracy in Germany

Lee Drutman Makes the Case for Multiparty Democracy in America

Hélène Landemore on Democracy without Elections

Glenn Tiffert on the Manipulation of Academia by Foreign Governments

Mareike Ohlberg on the Global Influence of the Chinese Communist Party

Amy Erica Smith on Politics and Religion in Brazil

William G. Howell and Terry M. Moe on the Presidency

Jill Long Thompson on Character in a Democracy

Juliet B. Schor on the Sharing Economy

Alexander Cooley and Daniel Nexon on the End of American Hegemony

Marlene Mauk on Citizen Support for Democracies… and Autocracies